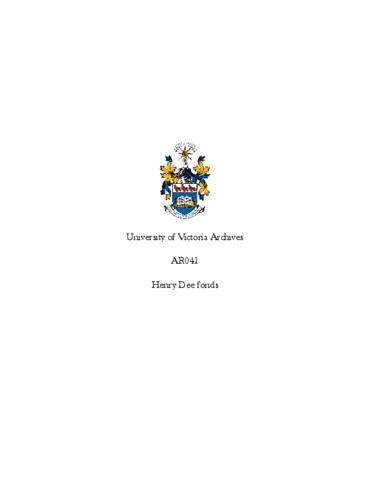 Henry Drummond Dee was born in Victoria, very close to the site of Victoria High School, where he eventually became a renowned teacher and administrator. He graduated High School in 1919 and in 1922 received his teaching diploma from the Provincial Normal School in Vancouver. Following this he attended the University of British Columbia where in 1927 he received his B.A. degree in History. That same year he joined the staff at VHS and began his 32-year career as teacher and administrator. He served as Vice Principle for fifteen years (1940-1955) and while working completed an M.A. from U.B.C. in 1943 and a B.Ed. in 1949. After his administrative success as Vice Principal, he was appointed Principal. In 1959 he became the Director of Secondary Education for the Greater Victoria School Board .