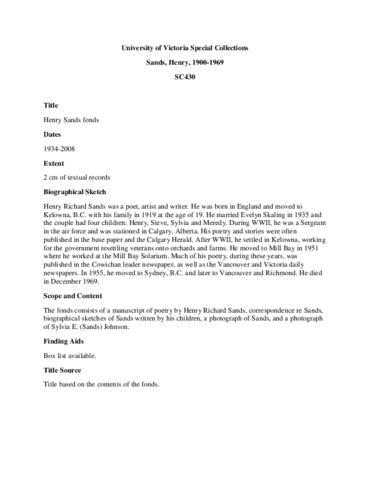 Henry Richard Sands was a poet, artist and writer. He was born in England and moved to Kelowna, B.C. with his family in 1919 at the age of 19. He married Evelyn Skaling in 1935 and the couple had four children: Henry, Steve, Sylvia and Meredy. During WWII, he was a Sergeant in the air force and was stationed in Calgary, Alberta. His poetry and stories were often published in the base paper and the Calgary Herald. After WWII, he settled in Kelowna, working for the government resettling veterans onto orchards and farms. He moved to Mill Bay in 1951 where he worked at the Mill Bay Solarium. Much of his poetry, during these years, was published in the Cowichan leader newspaper, as well as the Vancouver and Victoria daily newspapers. In 1955, he moved to Sidney, B.C. and later to Vancouver and Richmond. He died in December 1969.