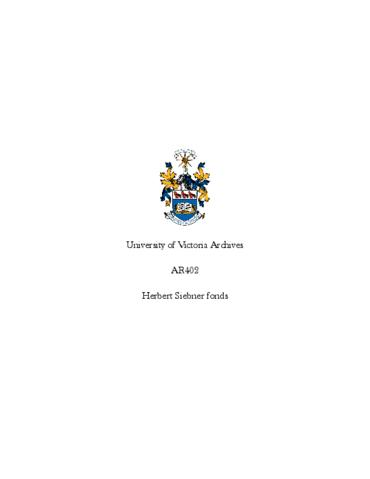 3.75 m of textual records and other material

Expressionist painter, printmaker, and sculptor, Herbert Johannes Josef Siebner, was born in Stettin, Prussia on April 16, 1925 to Margarete Agnes (Resch) and Paul Hermann. He married Hannelore Roehr in 1950 and had one daughter, Angela, born 1951. In 1954, Siebner, Hannelore and Angela immigrated to Canada, settling in Victoria where the artist lived until his death in 2003.
Artistic Training
A master printmaker, Siebner was introduced to the art and techniques of engraving and printmaking when apprenticed to Atelier Max Richter in Stettin. His apprenticeship, a requirement for entry into the Academy of Art, was cut short by the onset of World War II and his conscription into the German army at age 17 in 1943. During the war, Siebner worked as a draughtsman while making extra money drawing portraits of fellow soldiers and officers. After his release from a Russian prisoner of war camp, Siebner made his way to Berlin where he managed against the challenges of post war poverty and supply shortages to continue his arts training. He spent 4 years at the Berlin Academy (1946 to 1949) where he was first introduced to arguably his greatest stylistic influence, the German Expressionists.
Work
His signature style and predominant themes coalesced from these early artistic experiences as well as his fascination with the art of primitive cultures and study of mythology, and was fostered by his research on mural techniques in Europe (1962-1963) funded by a one-year travel grant, as well as many subsequent trips to Mediterranean countries. After arriving in Canada, Siebner taught at several post secondary institutions including the Universities of Victoria, British Columbia, Alberta and Washington, before turning his focus entirely to his own art production after 1970.
Deeply involved in the local art scene, Siebner was a founding member of a local artists’ group, the Limners, committed to representations of the human figure. The founding members, including, Maxwell Bates, Myfanwy Pavelic, Robin Skelton, Richard Ciccimara, and Elza Mayhew, adopted the name “Limners” from the medieval term, which referred to itinerant artists who produced mainly illuminations and portraits.
Herbert Siebner was a charismatic figure that never shied away from controversy. In the early 1970s he recalled his artworks from galleries all over Canada in protest of the high commissions they extracted. He notably fought a lengthy legal battle against the Art Gallery of Greater Victoria over ownership of a series of travel sketches made during his year abroad and continually argued with the Province of British Columbia about a commissioned mural he created in 1975 that was never installed and remained in storage.
Among many honors, Siebner was made a member of Royal Canadian Academy of Arts. Often credited with bringing Modernism to Victoria, his paintings, prints and sculptures have been exhibited and sold all over the world. Siebner was honored with one-man shows in Toronto, Victoria, Vancouver, Calgary, Berlin, Milan and Seattle. He created graphic prints for books of poetry and completed mural commissions in Victoria.
His publications include:
Colour, Line & Form (1970) ; Herbert Siebner: a Monograph (1979) ; Herbert Siebner: Dualities (1984) ; Herbert Siebner: a Celebration (1993) ; and Herbert Siebner Travel Sketches (1997)

The bulk of the textual records came to the archives in folders although very few had original titles. Some were roughly arranged by function, separating for instance, galleries from personal writing from Limners. A portion of the textual records arrived unfoldered with no discernible order. For the unfoldered material, the archivist has imposed an order. The remainder of the material was kept in its original physical order except in the case where records in a folder clearly belonged in files representing like functions.