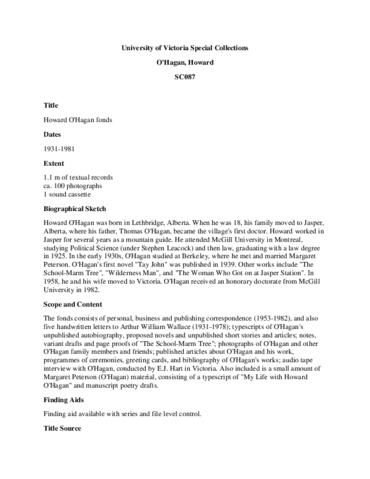 Howard O'Hagan was born in Lethbridge, Alberta, on 17 February 1902, the only son of Dr. Thomas O'Hagan and Mary McNabb. When he was eighteen he moved with his parents and sister to Jasper, where his father was the doctor at Jasper Park Lodge. Howard worked in Jasper for several years as a mountain guide. In the mid-1920's he attended McGill University in Montreal, first studying political science under Stephen Leacock and later working toward a law degree. After leaving McGill O'Hagan turned down promising jobs, preferring to travel. He worked as a reporter in Australia and a publicity man for a railroad company in Argentina, and came in contact with a wide variety of people, including native Indians and pioneers. In the early 1930's he attended the University of California at Berkeley and there met Margaret Peterson, "a tall blonde who became my destiny", whom he married a few years later. They had no children.

They lived at Berkeley where Margaret taught art for 22 years, but in the early 1950's she resigned in protest over the McCarthy controversies and never taught at Berkeley again. She and O'Hagan went to New York, where Margaret staged a successful one-person exhibition of her paintings. After a brief sojourn in Central America they moved to Vancouver Island, living for five years at Green Point near the Cowichan River and then moving to Victoria in 1958. In 1963 they went to Sao Paolo, where Margaret had been chosen as one of four Canadians represented at their Bienniale; in 1964 they went to Italy where Margaret studied mosaic techniques on a Canada Council grant, and lived at Lingua on the island of Salina for the next 11 years. They returned to Victoria in the mid-1970's. O'Hagan began writing in the 1930's; his novel, Tay John, was published in London in
1939 and remains one of his best-known works. He also published two collections of short stories, Wilderness Man (1958) and The Woman Who Got on at Jasper Station (1963). O'Hagan corresponded with many fellow writers (including Gary Geddes and George Woodcock) and was admired by his peers, but his work never achieved the wide recognition many people felt it deserved. O'Hagan received an honourary doctorate degree at McGill University in June 1982, and died in Victoria in the autumn of that year. O'Hagan's widow, Margaret Peterson, now lives in Sidney, B.C.