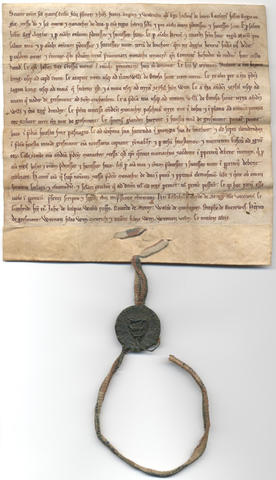 20 lines on vellum, 230x240mm, in brown ink, in a large well-written Romanesque hand, undated, c.1201. The fine green heraldic seal is attached by a striped linen cord and shows on the obverse three leopards passant and the legend "Sigill: Huberti: de: Burgo" and on the reverse a standing figure and the legend "Celo: Secretum." (Minimal wear and staining, with four tiny holes, but otherwise in excellent condition.) A very fine charter in Latin as chamberlain to King John by which Hubert de Burgh grants to the Cistercian House of Abbey Dore in Herefordshire the land at Linchoit which Henry II had given to the Abbey but which had come into Hubert's hands as governor of Herefordshire when King John gave him Grosmont and the land around it. The grant is conditional on four priests praying for ever for his soul and that of the king. Witnesses include John de Kilpac, Walter de Muchegros and Henry de Grosmont. [Maggs catalogue 977, item 68]