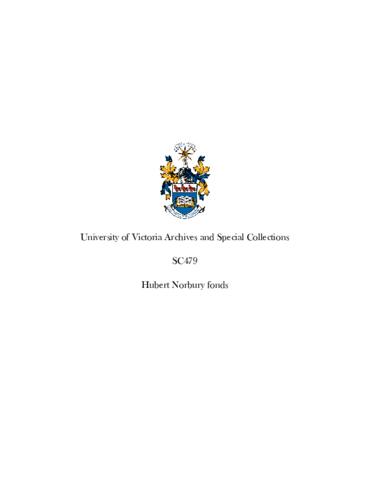 Hubert Norbury was born in 1897 in Liverpool, England to Frank Herbert Norbury (1871-1965) and Flores Ethel Fall (1872-1953). Frank was born in Liverpool and after secondary school attended the Liverpool City School of Art, the Lambeth Model School, and the School of Art, Architecture, and Applied Art at the University of Liverpool. From 1893 to 1900 Norbury taught at the University of Liverpool, and from 1900 to 1914 had a private carving practice. On 10 June 1896 Norbury married Fall, who was also from Liverpool, and was a pianist and composer. Together they had two children, Hubert and Esmé. In 1902 Frank volunteered with the 1st Cheshire Royal Engineers and by 1908 was a major with the Cheshire Infantry Brigade. During the War he served as a major and was awarded the Italian Croce di Guerra and Order of the British Empire.

In August 1914, Hubert, aged 17, enlisted in the British Army. He subsequently saw three years of service in France. In 1919 Hubert immigrated to Canada and settled as a homesteader near Edmonton. The following year his parents joined him in Canada. During the 1920s Hubert worked as a newspaper reporter in Edmonton, and in the 1930s for the Alberta Department of Public Works. It was during this time that he took up photography and co-founded the Edmonton Photographic Society. In May 1943 Norbury was accepted into the Royal Canadian Navy as a Petty Officer Photographer. He spent the war in Ottawa as a photography instructor at Naval Service Headquarters.

Following the War, Norbury remained in the Navy and was posted to Esquimalt, where he continued to teach photography. Norbury retired from the Navy in 1958 and subsequently began work as a freelance photographer, and regularly worked for Farmer Construction.

Fonds documents Hubert Norbury’s work as an architectural photographer for Farmer Construction after his retirement from the Navy in 1958 to circa 1965. Norbury’s photographs display the complete construction process, from bare ground to finished building. Also included is a folder of personal papers and photographs.

Many of the photographs in this fonds were used in the exhibition From a Modern Time: The Architectural Photography of Hubert Norbury: Victoria in the 50s and 60s (2009, part two of four in the Victoria Modern series), curated by Collier. http://uvac.uvic.ca/gallery/victoriamodern/from-a-modern-time/