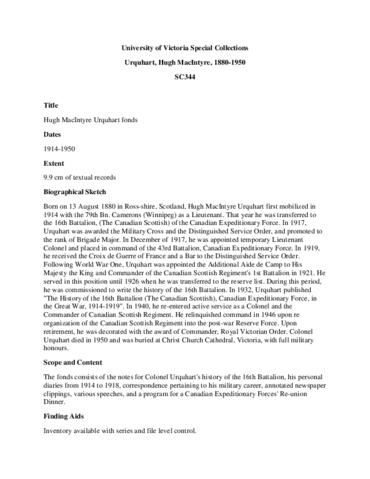 Born on 13 August 1880 in Ross-shire, Scotland, Hugh MacIntyre Urquhart first mobilized in 1914 with the 79th Bn. Camerons (Winnipeg) as a Lieutenant. That year he was transferred to the 16th Battalion, (The Canadian Scottish) of the Canadian Expeditionary Force. In 1917, Urquhart was awarded the Military Cross and the Distinguished Service Order, and promoted to the rank of Brigade Major. In December of 1917 he was appointed temporary Lieutenant Colonel and placed in command of the 43rd Battalion, Canadian Expeditionary Force. In 1919 he received the Croix de Guerre of France and a Bar to the Distinguished Service Order. Following World War One, Urquhart was appointed the Additional Aide de Camp to His Majesty the King and Commander of the Canadian Scottish Regiment's 1st Battalion in 1921. He served in this position until 1926 when he was transferred to the reserve list. During this period he was commissioned to write the history of the 16th Battalion. In 1932 Urquhart published "The History of the 16th Battalion (The Canadian Scottish), Canadian Expeditionary Force, in the Great War, 1914-1919". In 1940 he re-entered active service as a Colonel and the Commander of Canadian Scottish Regiment. He relinquished command in 1946 upon re organization of the Canadian Scottish Regiment into the post-war Reserve Force. Upon retirement he was decorated with the award of Commander, Royal Victorian Order. Colonel Urquhart died in 1950 and was buried at Christ Church Cathedral, Victoria, with full military honours.