The collection consists of a copy of typed letter from Senator John F. Kennedy to James Hoffa responding to Hoffa's analysis of Kennedy's labour-management reform bill (#S. 1555), 1p. with copy of typescript "Inaccuracies in Hoffa... Analysis of the Labour-Management Reform Bill," 3pp. Printed copy of Hoffa's analysis of the bill, 2pp. Copy of Tls from Hoffa to Kennedy referring to "labor-baiters" and "union-busting " in context of the bill, 1p. Copy of typed "Response to Senator Kennedy's Defense of the Anti-Labour Provisions of the Kennedy Bill," 26pp. Copy of typed "The Hot Cargo Bank Would Make Every Teamster an Involuntary Strike Breaker," 5pp. 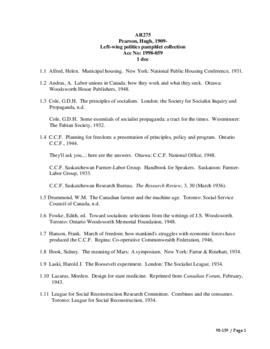