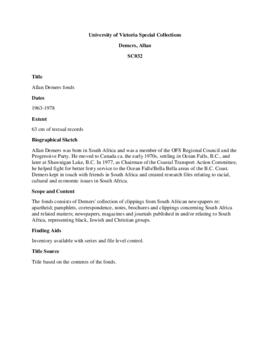 The collection consists of a handwritten postcard to Ted Berrigan.

The collection consists of mimeographed scripts for two plays presented by the club at the Empire Theatre, Calcutta, India. The scripts come from the plays' original productions in England, several years earlier. Also included are programmes for the two plays, a clipping containing a review of one play, and a rehearsal list for the other play. The two plays are "Murder on the Second Floor" by Frank Vosper and "The Wind and the Rain" by Merton Hodge.

The collection consists of selected correspondence, news items, signed programmes, descriptions of each instrument, and a photograph of Murray Adaskin, Stephen Kolbinson and the instruments.

The collection consists of a leather bound manuscript (probably unpublished) with the page ends gilded. All of the contents are handwritten. The contents consist of a title-page; a dedicatory epistle to the Rev. R.W. Dibdin (4 pp., both sides); and the text (36 pp., rectos only). Inscribed on the flyleaf in pencil are the words ""Presumably the original MS and unique. It is probable that this is unpublished (not listed in NUC).