The collection consists of a holograph letter to Sir Theodore Martin on literary and personal matters.

The collection consists of autograph manuscript of The Great Hunger and Self-Portrait. The Great Hunger is 58 recto pages on 23x18 cm sheets. The poem is a fair copy that has some corrections; it was first published by the Cuala Press, 1942. Self-portrait is in a lined 20x16 cm notebook on 31 recto pages and titled "Patrick Kavanagh 1962 Self-Portrait"; some words are corrected. 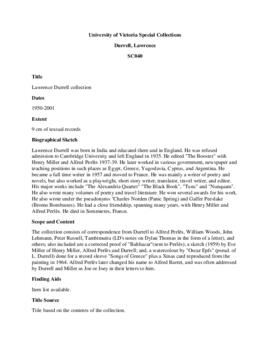 The collection consists of correspondence from Durrell to Alfred Perlès, William Woods, John Lehmann, Peter Russell, Tambimuttu (LD's notes on Dylan Thomas in the form of a letter), and others; also included are a corrected proof of "Balthazar"(sent to Perlès); a sketch (1959) by Eve Miller of Henry Miller, Alfred Perlès and Durrell; and, a watercolour by "Oscar Epfs" (pseud. of L. Durrell) done for a record sleeve "Songs of Greece" plus a Xmas card reproduced from the painting in 1964. Alfred Perlès later changed his name to Alfred Barret, and was often addressed by Durrell and Miller as Joe or Joey in their letters to him.

The collection consists of a mimeographed, signed letter from Starkey to Magee. In the letter, he thanks him for the note on "The Avatars", which he will print in his next issue (Jan.-Mar.). The letter accompanied a complimentary copy of his "Collected Poems".

The collection consists of a typed, signed letter to H. Calverley about the dramatisation of Sackville-West's novel "All Passion Spent".