The collection consists of mimeographed scripts for two plays presented by the club at the Empire Theatre, Calcutta, India. The scripts come from the plays' original productions in England, several years earlier. Also included are programmes for the two plays, a clipping containing a review of one play, and a rehearsal list for the other play. The two plays are "Murder on the Second Floor" by Frank Vosper and "The Wind and the Rain" by Merton Hodge. 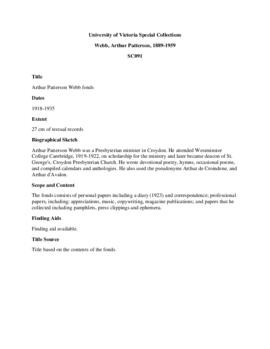 The fonds consists of subject files that contain newspaper clippings, publications, manuscripts, programmes, photographs, certificates and art work. The files are arranged alphabetically by title and include files on the subjects of Ballet, Bastion Theatre, Conservatory of Music, Theatre and the Victoria Symphony.

The fonds consists of 49 small artworks (originals and prints), including two bound volumes "The Artistry of Avis Rasmussen" and related printed materials ; one acrylic on canvas painting ; and one sketchbook.