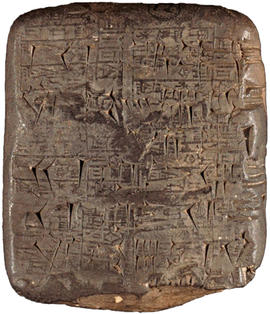 Interview with anthropologist, Dr. Antonia Mills, for Marianne Ainley’s research project, “Re-explorations: Gender, Science and Environment in the 19th and 20th Century Canada and Australia." The interview was conducted by Ainly’s research assistant Anna-Stina Kjellstrom. Mills talks about her academic career, and her experience researching the culture of the Beaver Indians [Dane-Zaa] in northern BC. She also talks about the differences between Indigenous and Western world views around knowledge. The collection consists of records generated by a number of different sources that have been brought together as a collection. The Social Sciences Research Project (1970-75) includes 29 interviews (and transcripts) with Major General The Hon. G. R. Pearkes and significant associates of Pearkes. They cover Pearkes' military career in both World Wars, his political career, particularly as Minister of Defence, and his role in the office of Lieutenant Governor or B.C. (1960-68). Over a number of years, subsequent to the Pearkes interviews, Dr. Roy commissioned several senior students to interview 185 former military personnel, Canadian and Allied. These were funded by the Department of National Defence. The collection offers personal accounts of action in the Great War and in most theatres of the Second War in which Canadians participated, as well as post war peace-time activities in NATO. When Dr. Roy retired in 1988 he gave a number of guest lecture tapes and some C.B.C. military oral history tapes. In 1982, Dr. Barnett B. Singer, a sessional lecturer, donated one interviews with a holocaust survivor, Mr. William Jacobs of Victoria. In 1983, Dr. David Stafford donated nine research interviews (and transcripts) for a book that he was doing on clandestine operations in World War II. In 1984, Elizabeth Hazlitte, a nurse at Victoria's, Veteran's Hospital, gave her interviews with six Great War veterans which she had completed on an L.I.P. grant. In 1990, Robert Winkenhower gave an interview of Olga Ghosh about the experience of a Jew living in Germany in the 1930's (accessioned 1994). In 1993, Cmdr. Hal Lawrence, a naval historian, donated copies of cassettes, summaries and transcripts of 120 interviews with retired Canadian navy personnel. These interviews were conducted between 1980 and 1990 under contract with DND. In 1993, B. Marshall, through Dr. Reg Roy, donated a cassette of an episode of Lister Sinclair's CBC radio programme called "Ideas". The episode was called "A Sense of War" and contains the experiences of Nursing Sisters in W.W. II. In 1997, Dr. Shawn Cafferky donated 22 tapes and transcripts of interview on Naval aviation also commissioned by D.N.D. Directorate of History and Heritage. Interviews with Lt. Col. John Edmonson, M/Gen. Norman Ross and Mr. Geo. Kidd (Major) were added in 2007. "War Stories: A Life Remembered", an audio recording of Thomas Miller's experiences in the Canadian Army during World War II on 2 compact discs was donated in 2008, as well as an interview with Ross Purse describing conditions in Oeyama Camp in Japan during World War II. Will Pratt's interviews of Japanese-Canadian veterans were added in 2009. An interview with LCol Cyril Neroutsos was added in 2010. 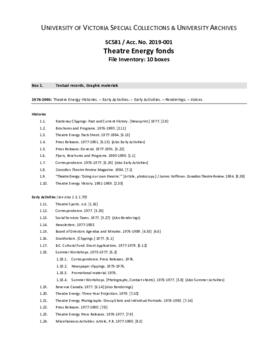 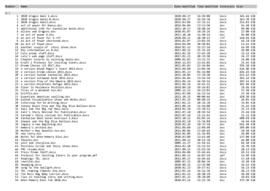 The series consists of drafts of Ambersone's works. Includes ebook versions of titles. 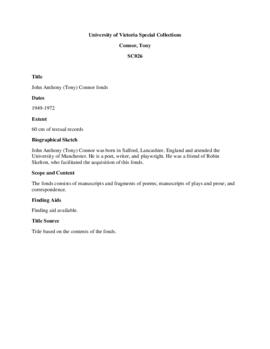 The fonds consists of correspondence and drafts of poetry, plays and prose providing a window into the professional life of Tony Connor. The fonds contains drafts of Connor's collections, including With Love Somehow (1962), Things Unsaid: New and Selected Poems 1960–2005 (2006), and The Empty Air (2012). Correspondence includes letters from Connor to academic Larry Vonalt and from Hungarian-British poet George Gomori.

The digital files consist of poetry drafts and are dated from 2007 to 2021 according to their "Last Modified" dates. Original​​ file ​​formats ​​include ​​.doc​ and .docx files.

The fonds consists of documents relating to Celu Amberstone's writing career. Records consist of poetry, playscripts, children's prose, notes for readings, publishing contracts, review clippings, correspondence, and acceptance and rejection letters from publishers and editors. The fonds also includes a proof copy of The Dreamer's Legacy by Celu Amberstone, and House of Commons Special Committee on the Disabled and Handicapped publication, "Native Population: Follow-up Report" (1981), which features a profile of Amberstone/Barbara Smith. The fonds is also comprised of digital text files of Amberstone's writings and e-book versions of her publications. 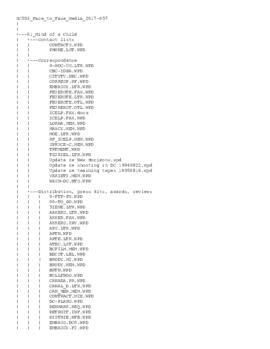 Series consists of digital records predominately pertaining to "The Mind of A Child"; "Pride and Prejudice: The Road to Human Rights and Multiculturalism in British Columbia"; "Queen’s Harbour: First Nations Education, 1860-1970"; and other related projects.

Video interviews with Lorna Wasnost’a7 Williams and Gary Marcuse recorded in 2019 for the University of Victoria and Survival International are also included. 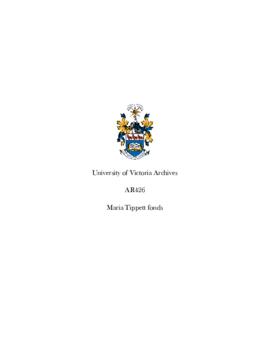 Fonds consists of research material for the following books: Emily Carr, A Biography (1979); Art at the Service of War: Canada, Art, and the Great War (1984); Making Culture: English Canadian Institutions and the Arts before the Massey Commission (1990); By a Lady: Celebrating Three Centuries of Art by Canadian Women (1992); Bill Reid: The Making of an Indian (2004); Portrait in Light and Shadow: The Life of Yousuf Karsh (2007). Also included are cassette tapes with interviews of Reid and Karsh; videotapes relating to Reid and Karsh; microfiche of pamphlets on Group of Seven; clippings of Tippett’s newspaper column “Women of a Certain Age”; collected research papers by others; and various other research materials.