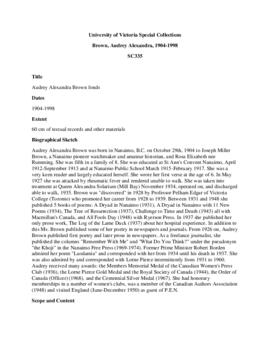 The fonds consists of correspondence to Markham Jones from the Charles Lamb Society relating to the society's activities in England.

The fonds consists of holograph correspondence written primarily to his mother from the trenches and war front in Europe, together with a typescript transcription of the letters; a photograph of Macgowan with (apparently) two members of his battalion; programme for a Brussels Ball; clippings; and 11 maps used by Macgowan to direct his troops in battle. Also included are aerial photographs of three regions of north-west France together with a map of north-west France (Denain region). Some of the photographs have holograph additions to them, largely for the purpose of identification of towns or other significant features.

The collection consists of autographs of classical musicians and performers, written on programmes and slips of paper, plus an autographed photograph of Marilyn Horne; and correspondence between McKenzie and Yehudi Menuhin, Reginald Werrinwrath, and the Vancouver Festival Society, 1950-1959.