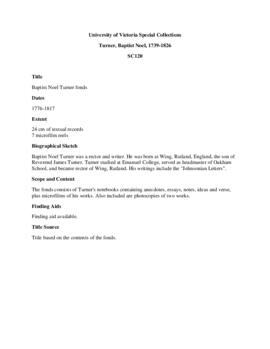 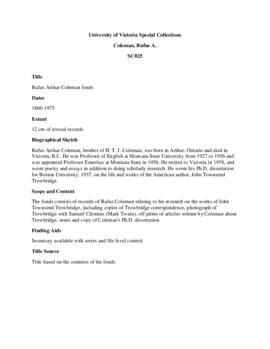 The fonds consists of records of Rufus Coleman relating to his research on the works of John Townsend Trowbridge, including copies of Trowbridge correspondence, photograph of Trowbridge with Samuel Clemens (Mark Twain), off prints of articles written by Coleman about Trowbridge, notes and copy of Coleman's Ph.D. dissertation.

The collection consists of a holograph letter to Sir Theodore Martin on literary and personal matters.

The collection consists of two handwritten letters to his wife, Jeanie on personal matters, together with one envelope. There is also a handwritten letter to an unknown man telling him he cannot supply him with a copy of one of his books, but is supplying a photo.