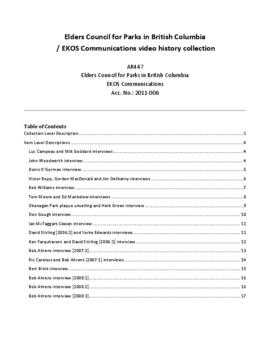 Collection consists of video history interviews with park pioneers, as well as some events, created by EKOS Communications in partnership with the Elders Council for Parks of British Columbia [http://www.elderscouncilforparks.org]to commemorate the 100th anniversary of BC Parks in 2011.

In December 2010, EKOS Communications Inc. dissolved and was re-formed as EKOS Communications under the sole proprietorship of creator, president and executive producer Rick Searle. As of April 2011, other chief officers of EKOS Communications included Creative Director/Writer Starr Munro, Editor/Shooter Richard Fulop, and Webmaster Prarie Blake. EKOS Communicationsâ€™ stated mission is â€œto assist with the rapid advancement of ecological literacy and sustainability through environmental education and communication;â€ â€œCombining video, audio, animation, and print with new media innovations, EKOS Communications connects people more deeply with each other to work together for the betterment of the planet.â€

The fonds documents the career of Edward “Ted” Griffin, covering his work as founder and manager of the Seattle Aquarium, his experience as an orca capturer, and his writing ventures with magazine articles and a full-length book. The collection includes personal and professional correspondence, drafts of publications, documents regarding Washington State’s marine mammal legislation, publications written by Griffin or featuring him, financial reports, research notes and reports, and promotional material surrounding Namu. Major topics covered in these papers include the passage of the marine mammal capture ban in Washington in 1971, the capture and ensuing stardom of Namu, Griffin’s book, Namu: Quest for the Killer Whale, aquarium research and planning, and marine mammal research. Forms of materials include correspondence, reports, publications, manuscripts, clippings, and photographs.