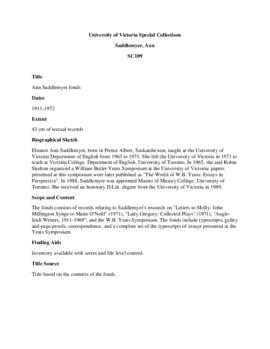 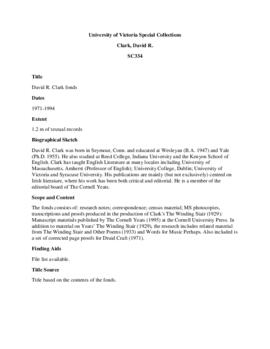 The collection consists mostly of correspondence from Russell about his social and literary activities. The vast majority of this correspondence is to William K. Magee. There are a few letters to Charles Weekes, Robert Graves, and Miss Buxton. In addition, there is a letter from AE's son Diarmuid Russell to Magee re Magee's proposed biography of AE and a photocopy of a letter (transcript) to Judge Richard Campbell from Dudley Digges re Campbell's broadcast "Farewell to AE". Other materials include a few clippings about AE (obit etc.) and an undated b/w photo of AE.

The collection consists of three handwritten letters to Arthur St. John Adcock concerning her reviews of various books. Also included is a letter to Mrs. Smith.

The collection consists of a handwritten letter to Sydney Cockerell. A transcription provided by Anthony Rota is also included.

The collection consists of autograph manuscript of The Great Hunger and Self-Portrait. The Great Hunger is 58 recto pages on 23x18 cm sheets. The poem is a fair copy that has some corrections; it was first published by the Cuala Press, 1942. Self-portrait is in a lined 20x16 cm notebook on 31 recto pages and titled "Patrick Kavanagh 1962 Self-Portrait"; some words are corrected.

The collection consists of a mimeographed, signed letter from Starkey to Magee. In the letter, he thanks him for the note on "The Avatars", which he will print in his next issue (Jan.-Mar.). The letter accompanied a complimentary copy of his "Collected Poems".