The fonds consists of materials created, received, and collected by Mary Elizabeth Duff during her involvement in advocating for women and lesbian rights in BC. The records consist of documents, reports, and pamphlets that relate to various women’s organizations and women’s rights activism. The fonds also includes a significant amount of ephemera and promotional materials for various women centered events and activities.

The fonds is comprised of 8 field journals of mycofloristic (mushroom) surveys with detailed illustrations by Oluna Ceska. Each specimen has been labelled by name, as well as by the location, date, and substrate where it was found. Additional observations include physical characteristics, smell, size, and spore size. The research focuses primarily on the southern Vancouver island region. Many of the studied specimens are from Observatory Hill, Victoria. Additional research locations include the Gulf Islands, Haida Gwaii, the BC mainland, the Yukon, Washington, and Oregon.

The fonds also consists of 9 survey reports of macrofungi on Observatory Hill that were researched and compiled by Oluna, with photos of specimens taken by Adolf. The reports describe species of fungi that were found, their location, as well as environmental factors that impact fungi growth.

The fonds consists of drafts of writings, correspondence, research notes, and printed materials. 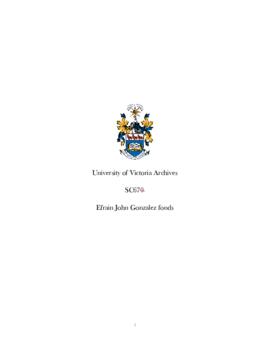 The fonds consists of photographs of transgender women at various clubs and events in New York City during the 1980s and 1990s, as well as photographs of panel discussions, marches and events from 2000-2020. The locations include: Fabric Factory Club, Speed Limit 55 Club, New York University (NYU), Lucky Cheng's, St. Mark's, the CBGB & OMFUG Club, the Pyramid Club, the Silver Swan, and Meow Mix Club. The majority of the photographs were taken at Fabric Factory and Speed Limit 55.

The collection consists of publications (mostly academic) regarding the transgender experience. These articles were reprinted and disseminated by the Erickson Educational Foundation.

The collection consists of materials collected by Ms. Bob Davis regarding the transgender and transsexual experience. Materials mainly include articles, publications, magazines, theatre programmes, photographs, and ephemera. Some materials specifically relate to issues surrounding the City College of San Francisco.

The fonds consists of 41 VHS videocassettes consisting of films, television programs, and broadcast television recordings on transgender themes and topics.

The fonds consists of one poetry reading poster, titled "Tongues of Fire featuring Elise Pallagi," which took place May 8, 2019.