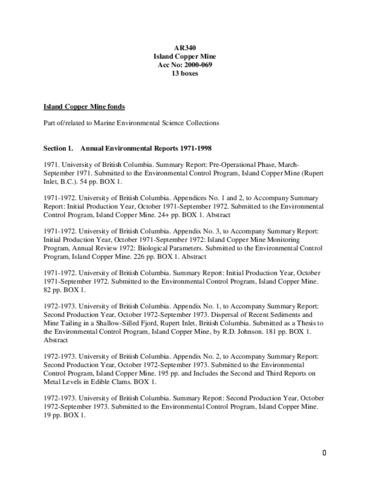 The Island Copper Mine (ICM), which was Canada's third largest copper mine, was located about 16 kilometres South of Port Hardy, near the northern end of Vancouver Island, British Columbia, Canada. From 1970 to 1995, Copper, Gold, Silver, Molybdenum and a by-product Rhenium were mined, using conventional open pit truck and shovel methods. At closing more than 1 billion tons of material had been moved, leaving the deepest excavated depression below sea-level on earth.

At one time, the mine employed over 900 people, and helped turn the tiny community of Port Hardy into a town of 5,000. It also made very significant contributions to the mining and milling industry. Because of the challenges faced by the mine, including low-grade ore and economic recession, many improvements to techniques and equipment were implemented, and copied around the world. Examples include the tailings disposal system, the comprehensive environmental monitoring program, the use of a semi-mobile crusher system located in the pit itself, and the South Wall Pushback, a 4,000 foot long plastic concrete wall constructed as a seepage barrier against seawater intrusion, which allowed mining to continue longer than anticipated.

To deal with the massive amounts of mine tailings produced, Island Copper Mine discharged around 400 million tons of tailings through an outfall at 50 m depth into the adjacent Rupert Inlet, a process known as submarine tailings disposal (STD) or submarine tailings placement (STP). The mine's final environmental project was the conversion of the pit to a meromictic pit lake, which involved flooding the pit with seawater, and forming a stratified lake with anoxic bottom waters into which the acid rock drainage could be injected and neutralized. This was a novel, near-passive system.

ICM pioneered the engineering for STD systems and the monitoring techniques for assessing the impact of tailings on the marine ecosystems, and subsequent recovery from that impact. For thirty years, a team of scientists and engineers from BC universities oversaw the assessments conducted by the mine.