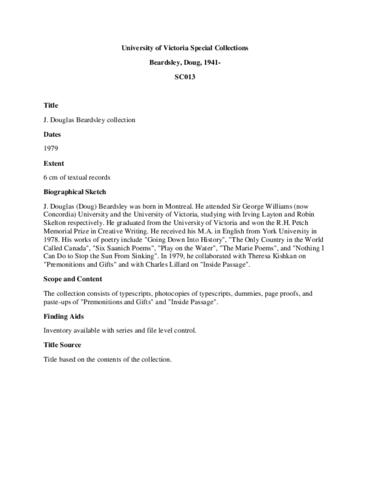 J. Douglas (Doug) Beardsley was born in Montreal. He attended Sir George Williams (now Concordia) University and the University of Victoria, studying with Irving Layton and Robin Skelton respectively. He graduated from the University of Victoria and won the R.H. Petch Memorial Prize in Creative Writing. He received his M.A. in English from York University in 1978. His works of poetry include "Going Down Into History", "The Only Country in the World Called Canada", "Six Saanich Poems", "Play on the Water", "The Marie Poems", and "Nothing I Can Do to Stop the Sun From Sinking". In 1979, he collaborated with Theresa Kishkan on "Premonitions and Gifts" and with Charles Lillard on "Inside Passage".

Charles Lillard was a poet, dramatist, historian, writer, bibliographer, critic, editor and publisher specializing in the Northwest Coast. He was born in California and grew up in Alaska. He taught English at both UBC and UVIC. He had several volumes of poetry published, including "Drunk on Wood" (1972). He also worked as a columnist for several papers and contributed fiction and non-fiction to magazines. In addition, he edited and re-published several out of print historical works. Together with Robin Skelton and Rhonda Batchelor, he founded Reference West. He died in Victoria, B.C.

Theresa Kishkan was born in Victoria in 1955. She has travelled throughout North America and Europe and lived for several months in a Greek fishing village. She has worked as a campsite attendant and library assistant. She was educated at U. Vic. Her poems have been published in many periodicals, and her chapbook, Arranging the Gallery, was published by Fiddlehead Poetry Books in 1976. Her other books of poetry include Ikons of the Hunt (Sono Nis, 1978) and I Thought I Could See Africa (High Ground Press, 1991). In 1979 she and Doug Beardsley published Premonitions and Gifts containing poems by both authors.