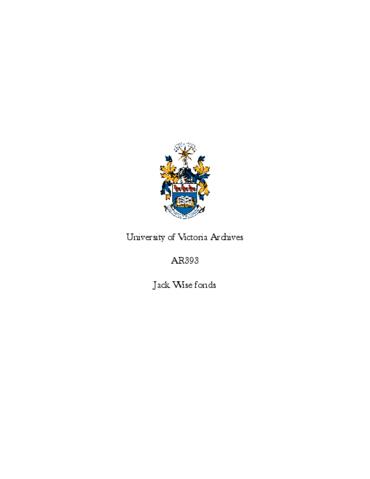 2.4 m of textual records and other material

Jack Marlowe Wise was born 27 April 1928 in Centerville, Iowa to Ralph Marlowe Wise and Zarilda Jane Morris. Wise attended the New Orleans School of Fine Arts in 1949, earned a Bachelor of Fine Arts from Washington University in 1953, and a Master of Science in Arts from Florida State University in 1955. Wise married Mary Beatrice Winfield Hubbard in 1969 and they had three children: Jonathon Marlowe, Maria Zarilda, and Tomas Winfield. He spent his last years on Denman Island with partner Marilyn Hausman. Wise died 20 November 1996 in Victoria

Wise’s work from the 1950s consisted primarily of paintings in the abstract expressionist style. Wise met Anglo-Canadian artist and lifelong friend Toni Onley (1928-2004) while living and teaching textile art in San Miguel de Allende, Mexico, from 1958 to 1961. After returning to the United States, Wise became dissatisfied with his art production and immigrated to British Columbia in 1963, where he spent several years farming in the province’s interior. After a brief period of no artistic output, he embraced a fine brushwork technique and a miniaturist style, his subject matter shifting towards microcosmic mandala patterns and calligraphic fields. Wise’s first solo Canadian exhibit was with the New Design Gallery in Vancouver in 1965. He traveled to India on a Canada Council Fellowship to study Tibetan art in 1966, and, beginning in the early 1970s, studied calligraphy with Chinese artist Lin Chien-Shih. Wise, along with Lin Chien-Shih, Emily Carr, and Mark Tobey, is identified with the Pacific Northwest School of Abstract Calligraphic Painting, which combined American abstract expressionism with Asian calligraphic tradition and Buddhist philosophy. Wise is also linked to the West Coast Surrealists, or Hermetics, who included Gary Lee-Nova, Gregg Simpson and Ed Varney. The art establishment associated these schools with the psychedelic era and experimentation of the 1960s, and initially overlooked the intellectual and philosophical richness of Wise’s work. Although Wise was most obviously influenced by Asian traditions, his art is cited as having a cross cultural significance resulting from his strong interest in Jungian psychology and its central belief in the universal collective unconscious.

Wise exhibited regularly from the 1960s to the early 1990s. Major exhibitions included: Bau-Xi Gallery, Vancouver (1967, 1970, 1972, 1975); Commonwealth Institute Art Gallery, London, and Richard Demarco Gallery, Edinburgh (1969); Mendel Gallery, Saskatoon, and Polly Friedlander Gallery, Seattle (1971); Wells Gallery, Ottawa (1976); “Jack Wise: A Decade of Work” (a cross-Canada touring exhibit 1977-1978); Ken Heffle Gallery, Vancouver (1980); Kyle’s Gallery, Victoria (1981); Winchester Galleries, Victoria (1984); and “Karma of the Dragon: The Art of Jack Wise,” Art Gallery of Greater Victoria (1999). Wise also helped establish and develop the foundation programmes for the Victoria College of Art and the Metchosin International Summer School of the Arts, on Vancouver Island. In the 1980s, Wise taught at Emily Carr Institute of Art and Design in Vancouver and was artist-in-residence at the University of Calgary. His work is represented in many public, private and corporate collections, including the Scottish Arts Council, Canada Council Art Bank, the Victoria Art Gallery, the University of Victoria’s Maltwood Gallery, and the Smithsonian Institution.

Fonds was housed at the Art Gallery of Greater Victoria, then transfered to the custody of a third party acting on behalf of the Wise Estate , prior to donation to the UVic Archives in 2005.