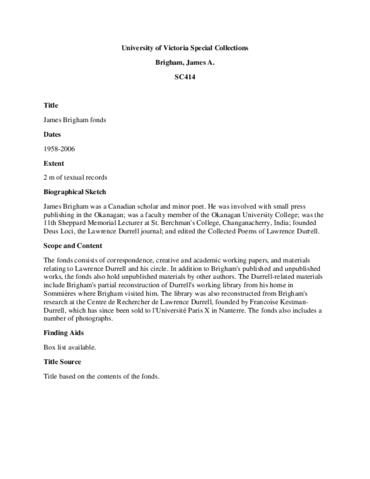 James Brigham was a Canadian scholar and minor poet. He was involved with small press publishing in the Okanagan; was a faculty member of the Okanagan University College; was the 11th Sheppard Memorial Lecturer at St. Berchman's College, Changanacherry, India; founded Deus Loci, the Lawrence Durrell journal; and edited the Collected Poems of Lawrence Durrell.

The fonds consists of correspondence, creative and academic working papers, and materials relating to Lawrence Durrell and his circle. In addition to Brigham's published and unpublished works, the fonds also hold unpublished materials by other authors. The Durrell-related materials include Brigham's partial reconstruction of Durrell's working library from his home in Sommières where Brigham visited him. The library was also reconstructed from Brigham's research at the Centre de Rechercher de Lawrence Durrell, founded by Francoise Kestman-Durrell, which has since been sold to l'Université Paris X in Nanterre. The fonds also includes a number of photographs.