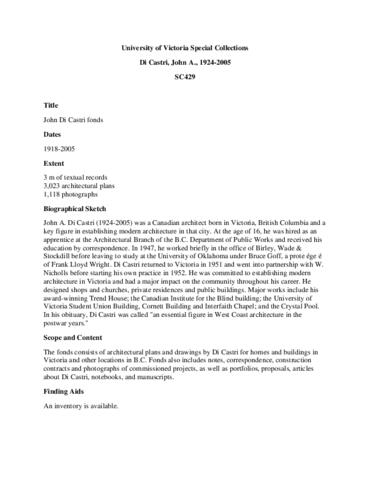 John A. Di Castri was a Canadian architect born in Victoria, British Columbia and a key figure in establishing modern architecture in that city. At the age of 16, he was hired as an apprentice at the Architectural Branch of the B.C. Department of Public Works and received his education by correspondence. In 1947, he worked briefly in the office of Birley, Wade & Stockdill before leaving to study at the University of Oklahoma under Bruce Goff, a protégé of Frank Lloyd Wright. Di Castri returned to Victoria in 1951 and went into partnership with W. Nicholls before starting his own practice in 1952. He was committed to establishing modern architecture in Victoria and had a major impact on the community throughout his career. He designed shops and churches, private residences and public buildings. Major works include his award-winning Trend House; the Canadian Institute for the Blind building; the University of Victoria Student Union Building, Cornett Building and Interfaith Chapel; and the Crystal Pool. In his obituary, Di Castri was called "an essential figure in West Coast architecture in the postwar years."