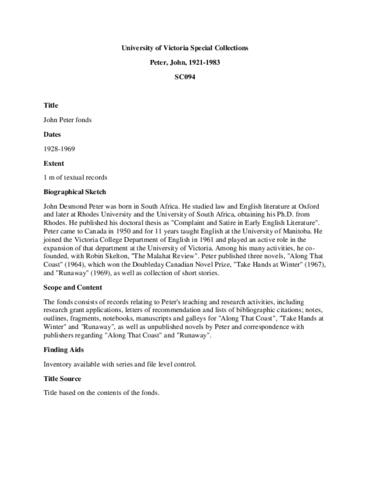 John Desmond Peter was born in South Africa in 1921. He obtained a B.A. and an LL.B. from Rhodes University, a B.A. and M.A. from Cantab., a D.Litt. from the University of South Africa and a D.Litt. from Rhodes University. He came to Canada in 1950 and was Associate Professor and later Professor of English at the University of Manitoba. By the time he joined the Victoria College Dept. of English in September 1961, Professor Peter had become an internationally renowned literary critic, a witty speaker and a popular teacher.

Professor Peter published his first book in 1956, a study of medieval satire, which is still regarded as the authority on that subject. He also published studies of Milton, T.S. Eliot and William Golding. Three of his articles for F.R. Leavis' Scrutiny were included in the two-volume anthology, Selection. In 1964 his first novel, Along That Coast, set in South Africa, was published by Doubleday and was awarded Doubleday's Canadian Novel Prize. He published two more novels, Take Hands at Winter (1967) and Runaway (1969) which received generally good reviews.

Professor Peter served as Commonwealth Visiting Professor (which does not involve any teaching duties) at Oxford University for 1966-1967; he spent that year at Corpus Christi College researching English literature of the Renaissance and modern periods. He also held visiting professorships at the Universities of Wisconsin and Massachusetts, and served as a member of the selection committee for the Woodrow Wilson and Canada Council Doctoral Fellowships.

At U. Vic., Professor Peter was active in the English Dept. during its years of expansion in the 1960's and early 1970's. He helped establish both the Honours and Graduate programmes, and in 1967-1968 served as Acting Head of the Department. He was a founding member of the Canadian Association of University Teachers (CAUT) and the Writers' Union of Canada, on whose national executive he served as a B.C. Councillor, and was founding co-editor, with Robin Skelton, of the Malahat Review. Professor Peter also published a collection of short stories and was working on a fourth novel at the time of his death in 1983.

The records of John Peter were acquired by the University Archives from Professor Peter in 1969 and 1970, and in 1983 from the John Peter estate.

Further accruals are unlikely; however, this inventory will be updated as required.