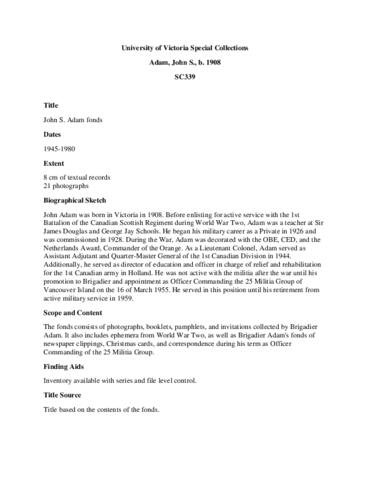 John Stronach Adam was born in Victoria in 1908. Before enlisting for active service with the 1st Battalion of the Canadian Scottish Regiment during World War Two, Adam was a teacher at Sir James Douglas and George Jay Schools. He began his military career as a Private in 1926 and was commissioned in 1928. During the War, Adam was decorated with the OBE, CED, and the Netherlands Award, Commander of the Orange. As a Lieutenant Colonel, Adam served as Assistant Adjutant and Quarter-Master General of the 1st Canadian Division in 1944. Additionally, he served as director of education and officer in charge of relief and rehabilitation for the 1st Canadian army in Holland. He was not active with the militia after the war until his promotion to Brigadier and appointment as Officer Commanding the 25 Militia Group of Vancouver Island on the 16 of March 1955. He served in this position until his retirement from active military service in 1959.