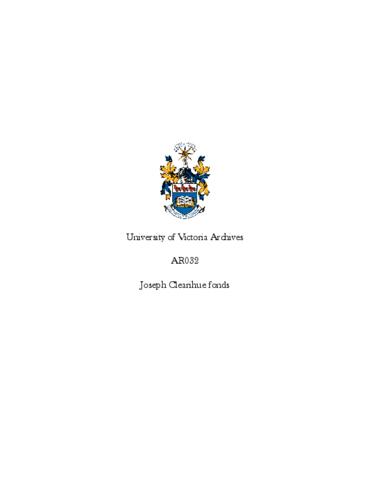 Joseph Badenoch Clearihue was born in Victoria 20 December 1887, the second of three children of Joseph and Annie Clearihue. He had an older sister, Etholine, and a younger brother, Albert. Clearihue attended Boys' Central School and Victoria High School studying at Victoria College and Vancouver College. As there was no degree-granting institution in British Columbia, in 1909 Clearihue entered McGill University, from which he earned a Bachelor of Arts in 1911. The following year Clearihue received a Rhodes Scholarship, and entered Jesus College, Oxford to study Law, earning his Bachelor of Civil Law in 1914. At the outbreak of the Great War Clearihue was in France. He soon returned home and shortly thereafter received a commission and served at Fort Macauley in the Pacific Coast Defence. In May 1916 he enlisted and was assigned to the 62nd Battery, training at Petawawa before being shipped to England aboard the Cameronia in September. After further training in England, Clearihue transferred to the 51st Battery, 13th Brigade CFA, and travelled to Le Havre 25 August 1917. On 5 September Clearihue saw his first action at Lievin. He remained in France until after the conclusion of the War.

In June 1919 Clearihue returned to Canada for demobilization. In July he returned to Victoria and later that year opened his own law practice. Throughout his career, Clearihue served as a Liberal MLA and Victoria alderman, and as a lawyer before being appointed a county court judge in 1952. He was Chair of the Victoria College Council (1947-63), and guided the College to university status. In January 1962, Clearihue turned the first sod at the construction site of the Clearihue Building, which was the first building on the Gordon head campus. Clearihue was also the first Chancellor of the University of Victoria, and Chair of the Board of Governors (1963-66).