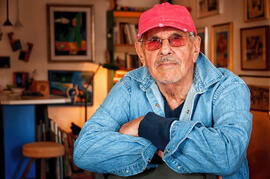 7.98 m of textual records other materials

Karl Spreitz was born in Graz an der Mur, Austria. During his childhood, he experienced primarily folk art and films, rather than fine art in museums and galleries. As Robin Skelton wrote, "it was in Austria that he encountered that world of illusion and comedy, and of disciplined fantasy," which forms the foundation of much of his later artistic works.

In 1944, Spreitz was a member of the Youth Corps sent to Hamburg, however he escaped and fled Germany. After European liberation at the end of the Second World War, Spreitz entered Graz University to study Physical Education after his application to an art school was declined. At Graz University he was appointed Assistant Coach to the Women's Olympic Team of Austria. During this time, Spreitz acquired a 16 millimeter movie camera with which he filmed European track and field events in Brussels; by doing so, taught himself the skills of film-making.

The fonds consists of film reels and videocassettes featuring artists Maxwell Bates, Ricki Ciccimarra, Leon Erickson, Jan and Helga Grove, Elza Mayhew, Myfanwy Pavelic, and Godfrey Stevens. The fonds also includes footage from the 1983 film "Ninstints" about the 1957 removal and preservation of totem poles from Anthony Island in the Queen Charlottes. Fonds also includes materials from Karl Spreitz's professional and personal life, including a substantial number of records regarding the work and collaborations of fellow Limners and other artists.