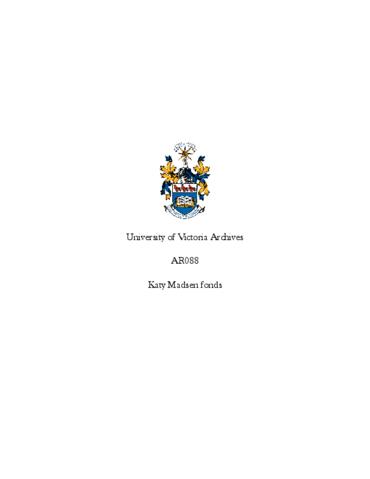 125 cm of textual records and other material

Catherine “Katy” Reed was born 7 February 1921 in Palo Alto, California. In 1942 she received a Bachelor of Science in biology from San Jose State University. While at university she met Harold F. Madsen (1921-1987), whom she married following graduation. The couple had three children, Robert, Carol, and Ken. In 1960 the Madsens moved to Summerland, B.C. for Harold to work at the Summerland Research Station, but returned to California shortly thereafter. In 1964, Katy and Harold moved back to Summerland after Harold took as job as head of entomology at the station. Now living permanently in Canada, Katy became involved with the local naturalist club and in environmental campaigns in the Okanagan region concerning Brent Mountain, Spotted Lake, and uranium mining. She was a founding director of the Sierra Club of B.C. in 1969; a Director of Pacific N.W. Chapter of the Sierra Club from 1970-72; and an active member of the South Okanagan Club on B.C. Nature Council, and the Okanagan-Similkameen Parks Society. Madsen also played a large role in the 1980 moratorium on uranium mining, which remains in effect. In 1982, she returned to painting portraits and landscapes, and moved to Victoria in 1993. In 2013 Madsen received the Queen’s Jubilee Medal for her conservation work. She died 7 July 2017 at age 97.