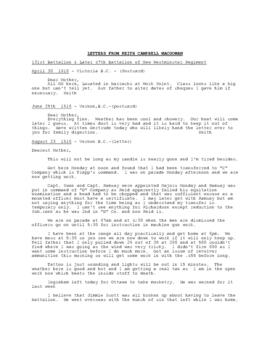 13 cm of textual records and other material

Macgowan was born in Gowan Brae, PEI, and died in New Westminster, BC. Macgowan was admitted to the bar in 1912, and joined his brother-in-law's firm as a partner. He joined the 131st Battalion of the New Westminster Regiment in 1916. Later he was drafted to the 47th regiment and eventually promoted to the rank of Captain. He was awarded the Military Cross at Vimy, Passchendaele, and Valenciennes. During his wartime service, he was also engaged in scouting missions and providing legal work for army. According to a letter sent to Macgowan on 5 April 1919 from his men, he was held in high regard by the men in his command as a "sympathetic, staunch and loyal friend and adviser."

The fonds consists of holograph correspondence written primarily to his mother from the trenches and war front in Europe, together with a typescript transcription of the letters; a photograph of Macgowan with (apparently) two members of his battalion; programme for a Brussels Ball; clippings; and 11 maps used by Macgowan to direct his troops in battle. Also included are aerial photographs of three regions of north-west France together with a map of north-west France (Denain region). Some of the photographs have holograph additions to them, largely for the purpose of identification of towns or other significant features.