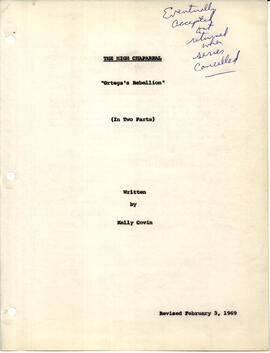 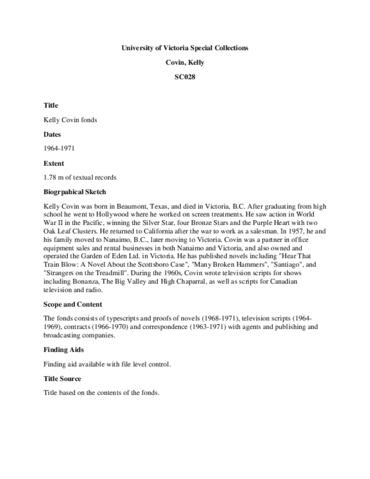 Kelly Covin was born in Beaumont, Texas, and died in Victoria, B.C. After graduating from high school he went to Hollywood where he worked on screen treatments. He saw action in World War II in the Pacific, winning the Silver Star, four Bronze Stars and the Purple Heart with two Oak Leaf Clusters. He returned to California after the war to work as a salesman. In 1957, he and his family moved to Nanaimo, B.C., later moving to Victoria. Covin was a partner in office equipment sales and rental businesses in both Nanaimo and Victoria, and also owned and operated the Garden of Eden Ltd. in Victoria. He has published novels including "Hear That Train Blow: A Novel About the Scottsboro Case", "Many Broken Hammers", "Santiago", and "Strangers on the Treadmill". During the 1960s, Covin wrote television scripts for shows including Bonanza, The Big Valley and High Chaparral, as well as scripts for Canadian television and radio.