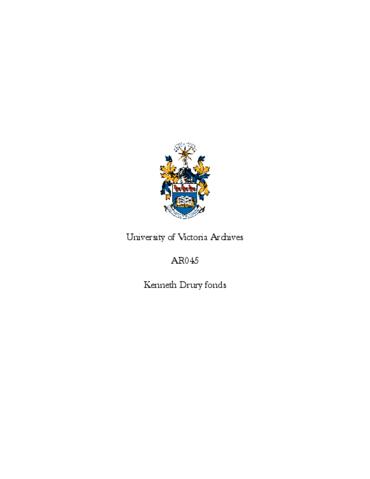 Kenneth Drury, journalist and editor with the Vancouver New-Herald and the Victoria Times, was born on 16 February 1893 in Victoria, the son of former MLA R.L. Drury and Mrs. Drury. He was educated at Boys' Central School, Victoria High School, the University of Toronto and the Columbia School of Journalism at Columbia University, New York, graduating from Columbia in 1915.

Drury began his career in journalism as a reporter for the Victoria Daily Colonist in the summer of 1910, covering the visit to Prince Rupert of Sir Wilfred Laurier, Prime Minister of Canada. He late studied piano at the Toronto Conservatory of Music, returning to Victoria and working for the Victoria Times until he went overseas with the Canadian Army in 1917. After the war he returned to work for the Times and served in various senior positions, including editor, until he left in 1944 to become editor of the Vancouver News-Herald and later assistant to the publisher of the Vancouver Sun. He retired from journalism in 1953 and returned to live in Victoria with his wife Katherine; he died in Victoria in 1971.

As a journalist Drury covered many important events, including the united Nations Conference on International Organization (UNCIO) in San Francisco from April to June, 1945, and also participated in journalism conferences including the Empire Press Union's Imperial Press Conferences in London, England (1946) and Ottawa (1950). Apart from journalism Drury was active in the local community, serving as Chairman of the Canadian Civil Liberties Union, Vancouver Branch, (1950), and on the Victoria Centennial Pioneers' Committee (1962). He collected song sheets, reflecting his continuing interest in music, and kept informed of current events, acquiring numerous newspapers, magazines, and ephemeral material.