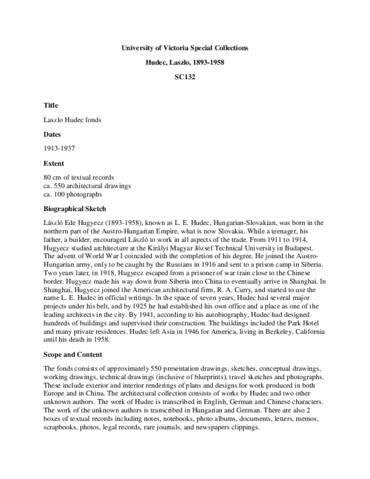 80 cm of textual records and other materials

László Ede Hugyecz, known as L. E. Hudec, Hungarian-Slovakian, was born in the northern part of the Austro-Hungarian Empire, what is now Slovakia. While a teenager, his father, a builder, encouraged László to work in all aspects of the trade. From 1911 to 1914, Hugyecz studied architecture at the Királyi Magyar József Technical University in Budapest. The advent of World War I coincided with the completion of his degree. He joined the Austro-Hungarian army, only to be caught by the Russians in 1916 and sent to a prison camp in Siberia. Two years later, in 1918, Hugyecz escaped from a prisoner of war train close to the Chinese border. Hugyecz made his way down from Siberia into China to eventually arrive in Shanghai. In Shanghai, Hugyecz joined the American architectural firm, R. A. Curry, and started to use the name L. E. Hudec in official writings. In the space of seven years, Hudec had several major projects under his belt, and by 1925 he had established his own office and a place as one of the leading architects in the city. By 1941, according to his autobiography, Hudec had designed hundreds of buildings and supervised their construction. The buildings included the Park Hotel and many private residences. Hudec left Asia in 1946 for America, living in Berkeley, California until his death in 1958.