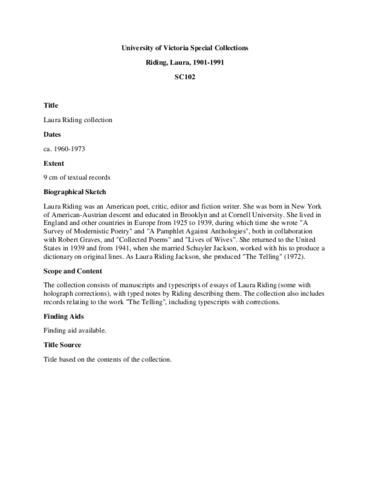 Laura Riding was an American poet, critic, editor and fiction writer. She was born in New York of American-Austrian descent and educated in Brooklyn and at Cornell University. She lived in England and other countries in Europe from 1925 to 1939, during which time she wrote "A Survey of Modernistic Poetry" and "A Pamphlet Against Anthologies", both in collaboration with Robert Graves, and "Collected Poems" and "Lives of Wives". She returned to the United States in 1939 and from 1941, when she married Schuyler Jackson, worked with his to produce a dictionary on original lines. As Laura Riding Jackson, she produced "The Telling" (1972).