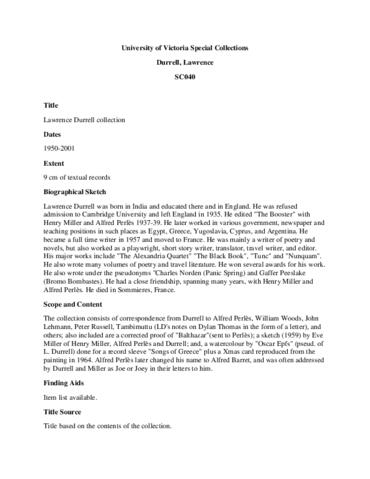 Lawrence Durrell was born in India and educated there and in England. He was refused admission to Cambridge University and left England in 1935. He edited "The Booster" with Henry Miller and Alfred PerleI

The collection consists of correspondence from Durrell to Alfred Perlès, William Woods, John Lehmann, Peter Russell, Tambimuttu (LD's notes on Dylan Thomas in the form of a letter), and others; also included are a corrected proof of "Balthazar"(sent to Perlès); a sketch (1959) by Eve Miller of Henry Miller, Alfred Perlès and Durrell; and, a watercolour by "Oscar Epfs" (pseud. of L. Durrell) done for a record sleeve "Songs of Greece" plus a Xmas card reproduced from the painting in 1964. Alfred Perlès later changed his name to Alfred Barret, and was often addressed by Durrell and Miller as Joe or Joey in their letters to him.