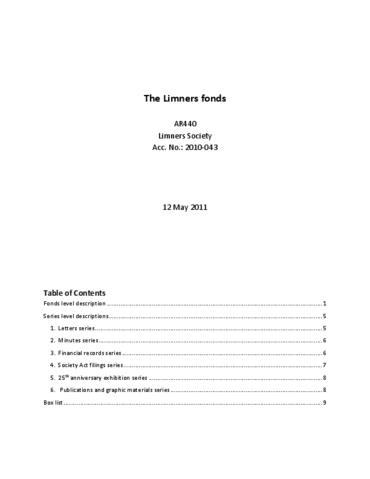 The Victoria Limners Society, commonly referred to as The Limners or The Limner Group, was a collective of painters, potters, sculptors and other visual artists that formed in 1971 in Victoria British Columbia. The name “limner” comes from traveling journeymen painters from the Middle Ages who painted portraits and signs. The Victoria Limners Society incorporated as a non-profit society under the Societies Act of British Columbia in October 1972 and it was dissolved in 2008. Many of their group shows were held at the Art Gallery of Greater Victoria and Winchester Gallery in Victoria, but they also showed in other venues from Vancouver, to Edmonton, to the Atlantic provinces.

1996 marked the 25th anniversary of the Limners and was celebrated with a series of exhibitions at various venues in Victoria, including the Winchester Gallery, the Art Gallery of Greater Victoria and Emily Carr House. This year also saw the publication of a book by Patricia Bovey of the Art Gallery of Greater Victoria called "A Passion for Art: The Art and Dynamics of the Limners" by Sono Nis Press. This book examined the contribution of the Limners to the Victoria arts scene since the 1970s, both at a group and individual level, as well as the Limners’ relationships with other Canadian artists.

In the late 1990s, Agustin Luviano-Cordero produced a video about the Limners, which was funded in part by Employment and Immigration Canada’s Job Development Programme. It was likely titled "The Limners: Art and Friendship" and it aired on the Knowledge Network, Rogers, Shaw Cable and possibly the Bravo Channel.

It appears that the records in this fonds were largely held in the custody of Limner secretary Sylvia Skelton until their donation. Many of the records are reproductions. Some records are duplicated in other Limner members' fonds.