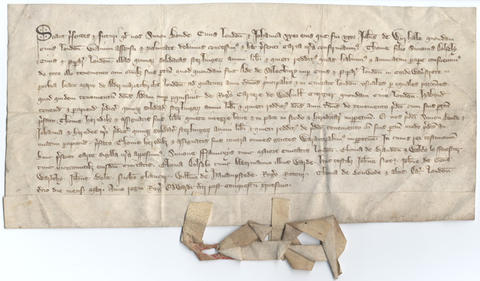 Purchased for UVic from Maggs in September 1991.

Grant by Simon Bonde, citizen of London, and his wife Johanna, to Thomas son of Simon Dolseley, citizen and piperarius (pepperer or spicer) of London, of the rent from a tenement with its appurtenances in Cordwainer Street in the parish of St. Mary Aldermary. The list of seven witnesses includes John Not, Mayor of London in 1364, and Nicholas Chaucer. The list of witnesses is preceded by the statement that Simon Franceys is now Mayor of London, and Thomas de Brandon and Walter le Forestier, sheriffs. There is a note on the verso that the charter was read and enrolled in the Husting Court of Common Pleas on16 May