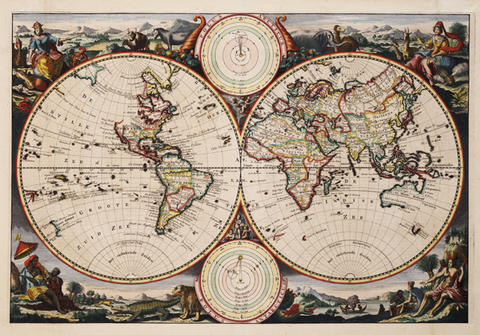 Double hemisphere map of the world. Includes two astronomical charts of the North and South poles. Includes vignettes in each corner, possibly representing the four continents, North America, South America, Eurasia and Africa. At top left is a European style figure surrounded by musical instruments and domesticated animals. At top right is a female figure surrounded by a camel, elephant and other animals. At bottom left are African or Indian figures with a dog, alligator and lion seen. At bottom right is an allegorical female figure with figures in rowboats, and a breastfeeding woman seen, along with a dragon.

Originally a map by Daniel Stoopendaal, titled "Werelt Caert" after one by Visscher from 1663. Used in Bibles published by the Keur family. After 70 years, when the plates became worn, they were re-engraved by Jan van Jagen, with some corrections.

Also available on the Internet at: http://nla.gov.au/nla.map-rm2815.