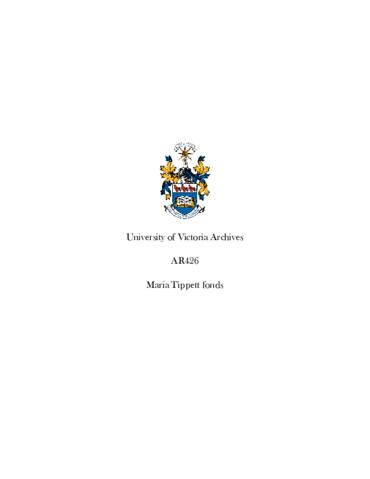 2.97 m of textual and photographic records.

Maria W. Tippett is a Canadian historian born 9 December 1944 in Victoria, British Columbia. Tippett graduated from Victoria High School in 1962. Following this she traveled in Europe and the Middle East from 1964 to 1966 and for a time worked in Berlin for the American government as a translator. When she returned to Canada she began her bachelor’s degree at Simon Fraser University, graduating in 1972. In 197x she completed her master’s degree at the University of Cambridge, and in 1982 earned her Ph.D. from the University of London. Her thesis was published in 1984 as Art at the Service of War: Canada, Art, and the Great War. From 1977 to 1986 she lectured at the University of Victoria, University of British Columbia, and Emily Carr Institute, and for the 1986-87 academic year served as the Robarts Professor of Canadian Studies at York University. Between 1995 and 2004 she was a Senior Research Fellow at Churchill College, University of Cambridge. Dr. Tippett has written extensively on British Columbian and Canadian art, culture, and history. She is perhaps her best-known for her 1979 work Emily Carr, A Biography, for which she received the Governor General’s Award. Additionally, she has written biographies of Frederick Varley, Bill Reid, and Yousuf Karsh.

In 1971 Tippett married the American-born historian and professor Douglas Lowell Cole (1938-1997), with whom she co-authored a book in 1977 about paintings of the B.C landscape. The couple divorced in 1978. In 1991 she married the English historian Peter Frederick Clarke (1942-) whom she met while at Cambridge. The couple now live on Pender Island, British Columbia and also maintain a cottage near Cambridge.

Fonds consists of research material for the following books: Emily Carr, A Biography (1979); Art at the Service of War: Canada, Art, and the Great War (1984); Making Culture: English Canadian Institutions and the Arts before the Massey Commission (1990); By a Lady: Celebrating Three Centuries of Art by Canadian Women (1992); Bill Reid: The Making of an Indian (2004); Portrait in Light and Shadow: The Life of Yousuf Karsh (2007). Also included are cassette tapes with interviews of Reid and Karsh; videotapes relating to Reid and Karsh; microfiche of pamphlets on Group of Seven; clippings of Tippett’s newspaper column “Women of a Certain Age”; collected research papers by others; and various other research materials.