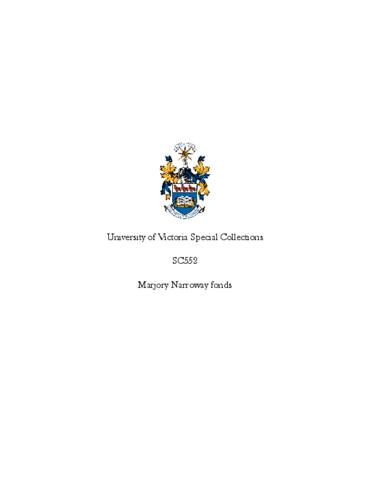 20 cm of textual records and other materials.

Marjory Narroway was born Marjory Dimsdale Jacquot circa 1903. She was born in London, England and immigrated with her family to Canada at age six. The second of three children, she had an older sister Barbara and younger brother Wilfred. The Jacquots spent two years in Winnipeg before moving to Vancouver, settling on 47th Avenue in the South Hill neighbourhood. Marjory finished high school in 1920 at age 17 and then took teacher training at the Provincial Normal School. While working as a teacher she took university classes in English but did not complete her degree. On 4 January 1934 Marjory married the musician Edward Philip Narroway, whom she had met at a church social. The wedding took place at St. Mary the Virgin Anglican, where Edward was the church organist. Following her marriage she stopped working. Seven years after she married she returned to teaching and taught for another twenty years in Port Alberni. The Narroways retired to Victoria, and it was there that Marjory took up writing. In 1970 she joined the Victoria and Islands Branch of the CAA. Narroway contributed regularly to the Times Colonist magazine "Islander."

The fonds consists of articles written by Narroway. This includes typed draft copies as well as published versions. There are also some research materials and clippings.