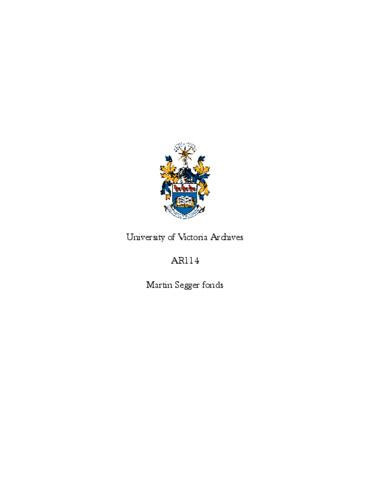 Martin Segger was born in Ipswich, England, in 1946. He immigrated to Saskatchewan with his parents in 1957 and moved with them to Port Alberni, B.C., in 1959. He holds a degree from the University of Victoria and an M.Phil. from the Warburg Institute, University of London. He worked as a museologist and cultural historian at the National Museum of Canada and the British Columbia Provincial Museum. He now lectures in art history at U. Vic. and since the late 1970's has been the Director of the Maltwood Art Museum and Gallery.

Segger has presented papers on architecture and art at conferences and published a number of books, including Walking Tours of Old Victoria (1971), City of Victoria Conservation Report (1975), This Old House (1979), The British Columbia Parliament Buildings (1979), Victoria: A History in Architecture, 1843-1929, with photographs by Douglas Franklin (1979), and The Buildings of Samuel Maclure: In Search of Appropriate Form (1986).

Segger has worked with a number of heritage organizations. He has been Chairman of the City of Victoria Heritage Advisory Committee, a member of the B.C. Heritage Advisory Board, a Director of the B.C. Heritage Trust, and a Governor of the Heritage Canada Foundation. In addition, Segger has branched out into politics, being elected Alderman of the City of Victoria for the first time in 1987. In November 1990 he was re-elected as Alderman for another three-year term and has worked hard to preserve heritage buildings in Victoria.