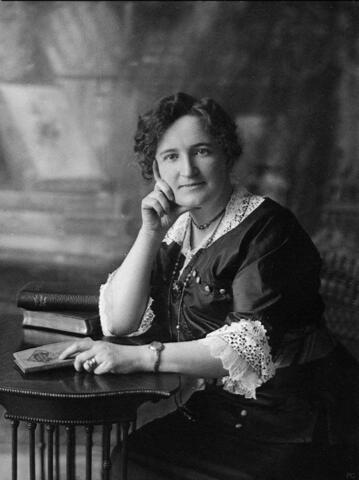 Nellie Letitia McClung (née Mooney) was a suffragist, writer, and public speaker. She was born in Chatsworth, Ontario on October 20, 1873. Her family moved to Wawanesa, Manitoba in 1880 and upon graduation from the Winnipeg Normal School at the age of 16, Miss Mooney began her teaching career at Manitou, Manitoba. Partly influenced by her future mother-in-law, Mrs. Annie McClung, Nellie became prominent in the Women's Christian Temperance Union from 1896 on, and in the suffrage movement. In 1896 she married Robert Wesley McClung, a pharmacist in Manitou. In 1908, her first novel, Sowing Seeds in Danny, was published. Other novels, essays, short stories, and sketches soon followed and continued to appear into her seventieth year. The McClung's moved to Winnipeg in 1911 when Mr. McClung took up work with an insurance company. Nellie became active in various organizations, including the Canadian Women's Press Club and the Winnipeg Political Equality League. She organized the latter in 1912 with the aim of advancing women's suffrage and such issues as conditions of female factory workers. Her activities in temperance and women's suffrage leagues continued when they moved to Edmonton in 1914 where she campaigned vigorously for social reform and women's rights. In 1916, mainly through McClung's activism, Manitoba became the first Canadian province in which women could vote and Alberta soon followed. She was elected to the Alberta Legislative Assembly as a Liberal from 1921 to 1926. After her political defeat she fought to establish Canadian women's rights to seats in the Senate. McClung , with Emily Murphy and three other women, challenged the interpretation of the word "person" in the BNA Act, as applied to Senate appointments. In 1929 this action resulted in a privy council ruling that women were persons. In 1933 the McClung family moved to Victoria. From 1936 to 1942 she served as the first woman member of the CBC Board of Governors. In 1938 she represented Canada as a delegate to the League of Nations. McClung wrote 16 books which include: Sowing Seeds in Danny (1908); In Times Like These (1918); Clearing the West (1935); Leaves from Lantern Lane (1936) and The Stream Runs Fast (1945). She died in 1951 at the age of 77.