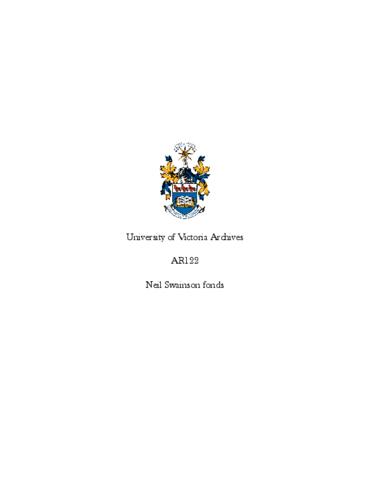 Neil Alexander Swainson was born in 1919 and was raised in Victoria. He earned a Bachelor of Arts (1939), Bachelor of Education (1940), and Master of Arts from the University of British Columbia, and a Doctorate in political science from Stanford University. Swainson began his teaching career in Creston and later taught at Victoria High School and the Provincial Normal School. In the 1960s Swainson was one of the founding members of the political science department at the University of Victoria, where he remained until his retirement in 1982. Additionally he served as a City Councillor for the Oak Bay district. Swainson was married to Aldyth _____, with whom he had four sons: John, Neil, Andrew, and Donald. He died 21 February 2009.