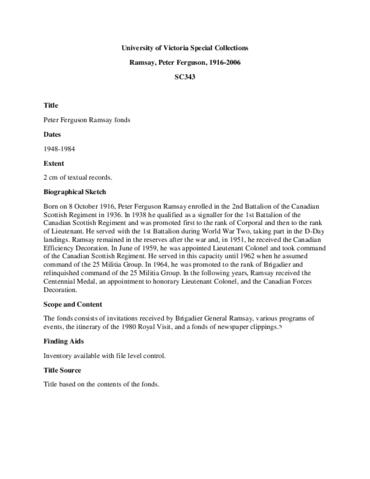 Born on 8 October 1916, Peter Ferguson Ramsay enrolled in the 2nd Battalion of the Canadian Scottish Regiment in 1936. In 1938 he qualified as a signaller for the 1st Battalion of the Canadian Scottish Regiment and was promoted first to the rank of Corporal and then to the rank of Lieutenant. He served with the 1st Battalion during World War Two, taking part in the D-Day landings. Ramsay remained in the reserves after the war and in 1951 he received the Canadian Efficiency Decoration. In June of 1959 he was appointed Lieutenant Colonel and took command of the Canadian Scottish Regiment. He served in this capacity until 1962 when he assumed command of the 25 Militia Group. In 1964 he was promoted to the rank of Brigadier and relinquished command of the 25 Militia Group. In the following years Ramsay received the Centennial Medal, an appointment to honorary Lieutenant Colonel, and the Canadian Forces Decoration.