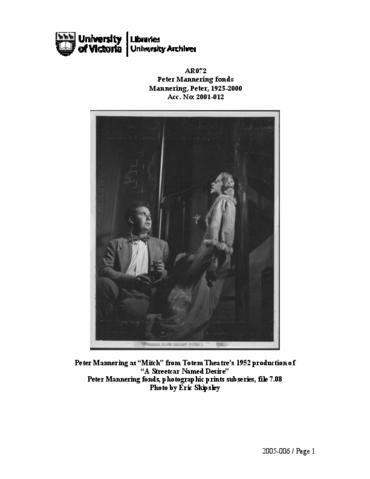 2.8 m of textual records and other material

Peter Mannering (1925-2000) was born in Vancouver, BC. Mannering (spelling changed from Mainwaring in 1952) was an actor, director, and producer and, in the 1960s and 1970s, he was the leading theatre figure in Victoria, BC. He first became involved in theatre at North Vancouver High School and Mannering advanced his skills in the Pasadena Playhouse (Calif.) from 1945-1947. As a freelance actor and director in Canada and England from 1940s to1961, Mannering was involved in hundreds of television and radio plays, stage plays and musical comedies. He worked with the CBC, the National Film board, the BBC, ITV, the Royal Winnipeg Ballet and the Winnipeg Symphony Theatre. In Vancouver, his venues included: The Little Theatre, North Vancouver Community Players, Everyman Theatre, Theatre Under the Stars, the Canadian Players National Tour, and the Totem Theatre (Vancouver and Victoria). From 1961-1963 he was at the Manitoba Theatre Centre and Rainbow Stage in Winnipeg. In Victoria, he started the Victoria Theatre Studio as a theatre school in 1963. In 1964 the name was changed to the Bastion Theatre Studio to harmonize with the Bastion Theatre which he founded that same year. The Bastion Theatre became the presiding company for the new McPherson Theatre building which opened in 1965. He remained Artistic Director until 1971. The Bastion did not renew Mannering’s contract in 1976 and ended his Bastion Studio Theatre and Children’s Theatre that year. He returned to freelance work in 1976 as actor, director and teacher. He continued his work in the Four Seasons Musical Theatre and other Victoria and Vancouver venues.