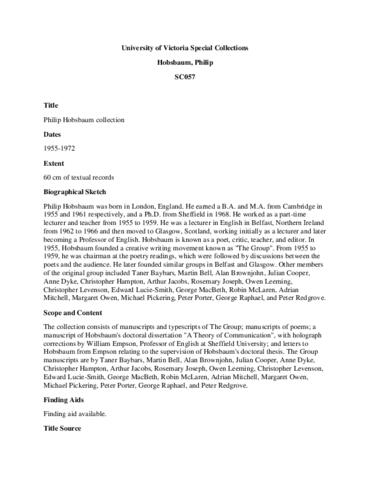 Philip Hobsbaum was born in London, England. He earned a B.A. and M.A. from Cambridge in 1955 and 1961 respectively, and a Ph.D. from Sheffield in 1968. He worked as a part-time lecturer and teacher from 1955 to 1959. He was a lecturer in English in Belfast, Northern Ireland from 1962 to 1966 and then moved to Glasgow, Scotland, working initially as a lecturer and later becoming a Professor of English. Hobsbaum is known as a poet, critic, teacher, and editor. In 1955, Hobsbaum founded a creative writing movement known as "The Group". From 1955 to 1959, he was chairman at the poetry readings, which were followed by discussions between the poets and the audience. He later founded similar groups in Belfast and Glasgow. Other members of the original group included Taner Baybars, Martin Bell, Alan Brownjohn, Julian Cooper, Anne Dyke, Christopher Hampton, Arthur Jacobs, Rosemary Joseph, Owen Leeming, Christopher Levenson, Edward Lucie-Smith, George MacBeth, Robin McLaren, Adrian Mitchell, Margaret Owen, Michael Pickering, Peter Porter, George Raphael, and Peter Redgrove.