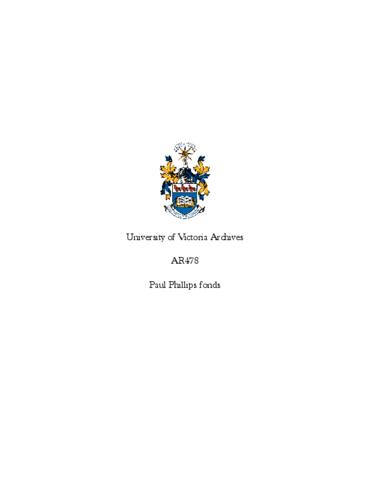 Paul Gwyn Phillips was born 14 January 1933 in Cheltenham, Wales and grew up in Builth. Phillips’s parents were market gardeners and also operated a small hotel. In 1958 he moved to Toronto, shortly thereafter to Vancouver, to London, England for a time, and then to the United States. Having become a banjoist and folk musician, Phillips performed at the Century 21 Exhibition in Seattle in 1962. During this time he also performed with Pete Seeger and Phil Ochs. After speaking at an anti-Vietnam War rally in Joliet, Indiana in 1967, he was arrested at his home in California by the FBI, charged with sedition, and forced to return to Canada. After living in Vancouver for a short while, Phillips moved to Victoria and in 1970 founded the Amor de Cosmos Food Cooperative. During the 1970s Phillips devoted much of his time to protecting heritage buildings and fighting new development in Fernwood. At various times he served as the director of the Fernwood Community Association and the Neighbourhood Improvement Program. In the 1980s he also helped to develop the Fernwood Solar Farm.

Phillips was married for a time in the 1960s to Cheryl _____, with whom he had one daughter, Olwen. He died 17 May 2012 at age 79. The main hall at the Fernwood Community Association is now called Paul Phillips Hall in his honour.