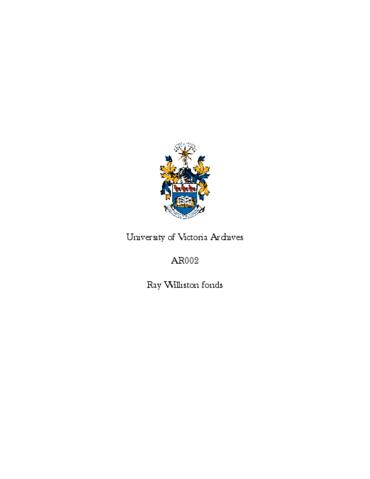 Ray Gillis Williston was born 17 January 1914 in Victoria to Hubert Haines Williston and Islay McCalman. Williston attended the Provincial Normal School and in 1934 began teaching in Salmon Arm. During World War II he served in the Royal Canadian Air Force. From 1945 to 1953 he worked as a school principal and was the school inspector for the Prince George/Peace River area.

In 1953 Williston ran in the provincial election for the Social Credit Party in Prince George, winning his seat. As part of W.A.C. Bennett’s government, Willison served as Minister of Education from 1954 to 1956, and later as Minister of Lands, Forests and Water Resources from 1956 to 1972. He was defeated in the 1972 election. During his time in office he acted as the provincial representative for the 1961 Columbia River Treaty, and played a part in the Two Rivers Policy. Following his political career he worked as general manager of the New Brunswick Forest Authority, president of British Columbia Cellulose Company, and as a consultant for the Canadian International Development Agency and the United Nations Food and Agriculture Organization. He died 7 December 2006 at age 91. Williston Lake is named after him.