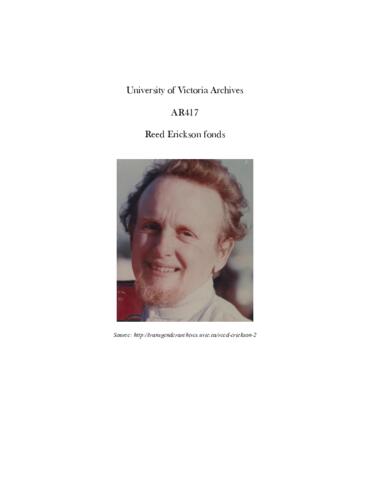 Reed Erickson was a mechanical engineer, businessman, financier, and philanthropist, known for his involvement and support of transgender and “new age” research through his organization Erickson Educational Foundation. Born Rita Mae Erickson to Robert and Ruth Erickson on October 13, 1917 in El Paso, Texas, Erickson attended the Philadelphia High School for Girls and Temple University (1936). The family, including younger daughter Roberta (later Roberta Simes) moved from Philadelphia to Baton Rouge, Louisiana. Erickson graduated from Louisiana State University (1946) with a degree in mechanical engineering, worked for the family's lead smelting business, and established Southern Seating, an independent manufacturer. Upon the passing of father Robert in 1962, Erickson inherited the family businesses Schuylkill Products Company Inc. and Schuylkill Lead Corporation, which he successfully ran until selling both companies in 1969 for close to five million dollars. Other organizations associated with Erickson were Inversiones Del Angel, AMOCO Oil, Gauguin Inc. and Wyoming Inc. Erickson's businesses, combined with well-selected investments, and real estate purchases, developed into large personal fortune estimated to be over 40 million dollars.

Erickson began a female-to-male gender transition in 1963 as a patient of Dr. Harry Benjamin, and underwent gender reassignment surgery in 1965. It was in these years of transition that Erickson married and divorced Daisy Harriman Lewis (1963-1964), and married Aileen Ashton (1965), with whom he had two children: Monica and Seth. After moving to an opulent home in Mazatlan, Mexico dubbed the “Love Joy Palace” in 1973, Erickson and Aileen divorced the following year. During this period Erickson began to experiment with drugs, which later developed into substance abuse. His addictions began to strain his personal relationships and his health. In 1977 Erickson married for a third time to Evangelina Trujillo Narkis (Eva). The couple moved to Ojai, Southern California (1979) so that Erickson could be closer to his children, who were in the custody of their mother Aileen. The marriage between Erickson and Eva dissolved between 1983 and 1985. Fleeing from drug charges, Erickson returned to Mexico in 1983. He married his fourth and final wife Maria Luisa de Celis Contreras in 1987. At this point in time his physical and mental abilities were limited due to his drug addiction, and his daughter Monica was appointed conservatorship of his estate. Reed Erickson died in 1992 at the age of 74 in Mexico.
Sponsorship and Contributions
Throughout his life Erickson continuously contributed financial support and sponsorship to organizations involved in transgender and homophile services and studies such as ONE Incorporated, Institute for the Study of Human Resources, Gateway Gender Alliance, Janus Information Facility, Henry Benjamin International Gender Dysphoria Association, and the Association for Transpersonal Psychology. Much of this support was possible through his creation of the non-profit Erickson Educational Foundation (EEF) in 1964, which was based in Baton Rouge, Louisiana. The stated purpose of this philanthropic organization was “to provide assistance and support in areas where human potential was limited by adverse physical, mental or social conditions, or where the scope of research was too new, controversial or imaginative to receive traditionally oriented support.” The EEF was a resource for transgender individuals, providing counseling services, referrals to trusted service providers, publications such as newsletters and brochures, and organizing conferences such as the first three International Symposiums on Gender Identity. Other areas of the EEF's financial support (John Lilly's dolphin communication research, “Course in Miracles” publication, various dream studies) reflect Erickson's personal interest in New Age methods of thought and healing.

ONE Inc. and Legal Cases

Erickson and his foundation developed a close relationship with ONE Incorporated, an organization devoted to homosexual rights and homophile studies that is still in operation. After an initial donation in 1964, Erickson helped ONE create a tax-exempt charitable division called the Institute for the Study of Human Resources (ISHR). This non-profit enabled ONE Inc. to focus on rights for homosexuals and human rights protests, while ISHR began education and support efforts, bolstered by tax-exempt donations. Erickson was named president of ISHR until 1977. In 1981 ONE achieved accreditation rights for granting graduate-level degrees in homophile studies, and Erickson was awarded with an honorary degree in the next year. This period of harmony between Erickson and ONE was not to last. In 1983 Erickson purchased a 1.9 million dollar property in Los Angeles called the Milbank Estate with the initial intention of granting the property to ONE to use as a head office. However, Erickson decided a year later that the property was no longer ONE's to use and Erickson's largest legal battle began, fighting against ONE's secretary Dorr Legg for the Milbank Estate. This case (and subsequent related cases) did not end until after Erickson's passing in 1992, when daughter Monica settled with ONE Inc.

Storage in various locations in Los Angeles before donation to UVic in 2008.

Original order could not be discerned. Intellectual order is imposed by employees of University of Victoria Archives.