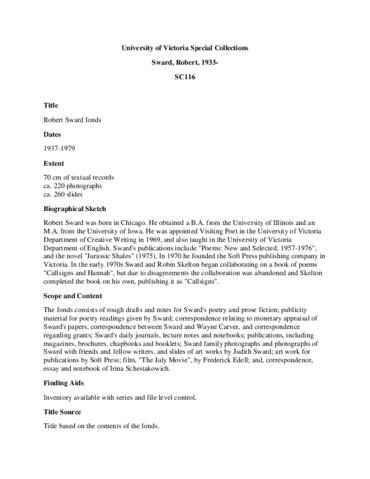 70 cm of textual records and other material

Sward's areas of academic interest have included creative writing, particularly poetry; 20th century British and American literature; and American poetry from Walt Whitman to the present. As a writer, his areas of interest include contemporary American poetry, Eastern philosophy and lyric poetry. His first collection of poems, Advertisements, was published by Odyssey Chapbook Publications in Chicago in 1958. Subsequent publications included Uncle Dog and Other Poems (Putnam, 1962), Kissing the Dancer and Other Poems (Cornell University Press, 1964), The Thousand-Year-Old FiancA

The records of Robert Sward were acquired by the University Archives in 1982, 1984 and 1994. Most of the material documents facets of his career as a poet and prose writer from the 1950's to the 1970's; his teaching career is mainly documented by holograph lecture notes and course outlines. Among Sward's records are files of the Soft Press, which Sward founded in Victoria, drafts of his poems and prose works, and many photographs and slides of Sward, his family and close friends. These records will be of particular interest to researchers studying not only Sward's own career but also the creative process in general and the development of small publishing companies in British Columbia.