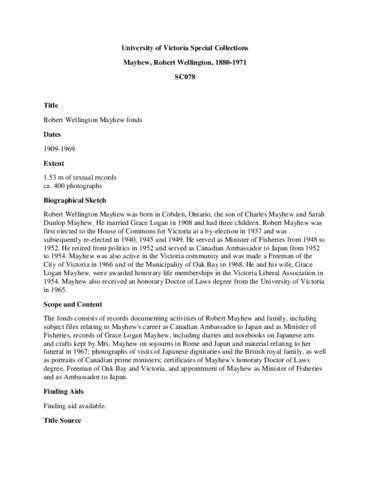 Robert Wellington Mayhew was born on 13 October 1880 in Cobden, Ontario, the son of Charles Mayhew and Sarah Dunlop Mayhew. He married Grace Logan on 26 February 1908; their children were Robert Logan, Charles Alan, and Jean Edwards; Alan Mayhew, an RCAF pilot during the World War, 1939-1945, was killed in action over the Indian Ocean in June 1943. His daughter Jean married Alex Lawrason; his daughter-in-law is the Victoria sculptor Elza Mayhew.

Mayhew was first elected to the House of Commons for Victoria at a by-election held on 29 November 1937; he was re-elected at general elections in 1940, 1945 and 1949. He served as Parliamentary Assistant to the Minister of Finance from 1946 to 1948, and was Minister of Fisheries from 1948 to 1952. He retired from politics in 1952, and was appointed Canadian Ambassador to Japan that same year, serving in this post until 1954.

Mayhew was prominent in the Victoria community for many years. He was president and later Vice-Chairman of the Board at Sidney Roofing & Paper Co. Ltd. and its subsidiaries, and was a member of the Victoria Advisory Board and the Royal Trust Company. Early in his political career he was Reeve of Oak Bay Municipality. Other memberships included the Rotary Club, Victoria Club, Colwood Golf Club and the Union Club. For his services to the community he was awarded a public service medal from the City of Victoria in 1948, and was made a Freeman of the City of Victoria in 1966 and of the Municipality of Oak Bay in 1968. Mayhew was a member and elder of the United Church in Victoria. He was given an honourary Doctor of Laws degree by the University of Victoria in 1965.

The records of Robert Wellington Mayhew were acquired by U. Vic. Special Collections from Mayhew's son, Robert Logan Mayhew, in August 1971.