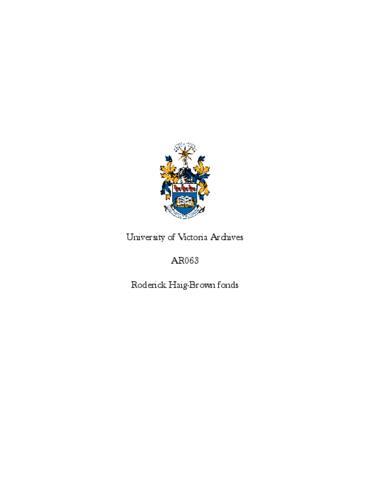 Roderick Langmere Haig-Brown was born 21 February 1908 in Lancing, Sussex to Alan Haig-Brown and Violet Mary Pope. In 1918 Alan, an officer in the British Army, was killed in action in France. Beginning in 1921 Haig-Brown attended Charterhouse School in Godalming, Surrey where his grandfather had been headmaster. Haig-Brown was later expelled, and in 1926 his parents sent him to Seattle to work at a logging camp. The following year, with his visa having expired, he moved to Vancouver Island and for three years worked at a logging camp at Nimpkish Lake. In 1931 he returned to London for and published his first book, Silver: The Life of an Atlantic Salmon. The following year he returned to British Columbia and in 1934 married Ann Elmore of Seattle. The couple settled in Campbell River and had four children, Valerie, Mary, Alan, and Celia. Throughout the rest of his life Haig-Brown wrote extensively on topics related to nature, fishing, and conservation, publishing 23 books. In 1953 the University of British Columbia granted him an honorary Doctor of Laws, and from 1970 to 1973 he served as the Chancellor of the University of Victoria. Haig-Brown died 9 October 1976 at age 68.

The material was selected from the Haig-Brown fonds held by UBC Special Collections, and photocopied for UVic Archives.